The Ultimate Guide To The Clean

Here are all the tips and tricks you need to know to perfect the Clean.

This classic Olympic lift is used to train power, speed, explosiveness and strength. Of course, we do not expect you to read this article and learn to clean perfectly as that requires consistent practice and time. However, we can give you the tools you will need to recognize the difference between good and bad technique. Using the right technique, you can exploit this lift to improve all the elements it demands of your body.

The clean is arguably the less technical of the two Olympic lifts. For now, we are dropping the Jerk portion and just working on getting the barbell from the floor to the shoulders. A clean is performed in one smooth motion. The portion of the lift in which the barbell is being pulled up can be compared to a throw. The second portion can be compared to a catch, with the athletes pulling themselves down under the barbell to catch it on the shoulders before standing up with the bar.

This portion of the lift is sometimes broken down into two parts. The initial part of the pull is extremely important because the athlete is setting up a start position for the entire lift.

The ideal start position looks something like a deadlift with the hips set lower, allowing the spine to be more vertical. Feet should be comfortably apart and pointed relatively straight ahead. The angle of the feet and hips will be dependent on the athletes’ level of hip and back mobility. Hands are placed approximately outside of hip width apart.

This is the ideal position to lift the bar as high as possible. The initiation of the pull should be controlled and steady. Pulling a bar too enthusiastically is a quick way to lose the lift, particularly at lighter weights, and losing control of the entire movement. As the barbell leaves the ground, it should slide along (or within millimeters of) the tibia. As the barbell ascends, the athlete is careful to pull by extending the knees and the hips at the same time.

The ratio of knee and hip extension keeps the barbell in a relatively vertical trajectory, the most efficient for this lift. It also helps to pull the knees backward, receding out of the way of the barbell. It also allows maximal power at the end of the pull, something you will need to catch the bar!

Pulling Past The Knees

As the barbell passes the knees, the majority of your work is done. The back and glutes fire up, opening the hip. This brings the thighs forward and into contact with the barbell. The contact should be bringing the barbell in an upwards motion, not horizontal. Slamming the thighs into the bar is a classic amateur error, sending the vertically moving bar forwards, losing momentum. Sure, it works with lighter loads, but as you load up your barbell, it is increasingly difficult to work with an inefficient motion.

Queues For Your Pull:

This brings us to the catch. There are only two reasons why a person might miss a clean after a perfect pull.

The first reason is strength. Even after pulling, the athlete is unable to stand up with the barbell in the front rack position (also called the recovery portion of the lift). The answer is to squat! It might be a question of quads, mid and upper back, or core strength. Whatever the weak link is, it can be regulated with front and back squats multiple times per week.

The second reason is that the elbows were too slow. That means that the body was not properly set up to receive a heavy load on the shoulders yet. As soon as the pull is complete, the catch position should be set up. Pulling your body under the bar means flexing into a deep squat and rotating the elbows around, under and in front of the barbell as fast as possible. Getting the elbows up and in place faster means the athlete is ready to receive the bar faster. At heavy loads, there is no time to waste between the pull and setting up the catch position!

Queues For The Catch

The clean should be pulled using hooked grip. Take the barbell by wrapping the thumbs around the bar and then grip the fingers over top of them. Spacing of the hands depends on the the individual lifting. The ideal mechanical position is with the arms perpendicular to the floor, approximately shoulder width apart, but comfortably outside of the knees as well.

Our Top Final Lifting Queues To Focus On:

The best way to perfect your clean and get those numbers up is to use the best technique possible and practice regularly. Cleaning three times per week is a great place to start! 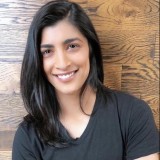 FD Bulsara, BSc is a competitive athlete in Olympic weightlifting and a student in Osteopathy. She coaches private and group fitness classes and freelance writing about her passions: fitness, health, sport, nutrition, weightlifting, CrossFit, injury prevention, pain relief, injury rehabilitation, and the latest research on all these topics! She is a dog person and spends free time training at the lake. Find her at www.4myhealthnow.com.

In this article, we dive into stretching and performance and cover best practices to optimize performance.

Setting goals doesn’t do you much good unless you work to accomplish them. We look at some of the best strategies...