Movement prep, as the name implies, gets your body ready for movement. By completing a succession of dynamic movements, the goal is to raise your core temperature, prime your nervous system for physical activity and to strengthen your muscles.

In addition to preparing you physically, movement prep also helps you to dial in mentally. As your heart rate increases, it increases the blood flow to working muscles. This kick-starts the body and allows you to activate all your muscles, perhaps even the forgotten ones!! Most of us (even top-level athletes) have a muscle group that is not fully active. This, in turn, can cause other parts of the body to compensate, ultimately ending in injury. A common example is that of the small muscles located in the hips. If the gluteus medius is not activated this can lead to lower-back pain, knee pain, and even groin strain. Movement prep can solve all of this within a couple of days, by allowing the body to recollect movement patterns that perhaps have not been used for many years.

Movement prep allows you to reinforce muscles within a new range of motion, thus stabilising all the small muscles around the joints. Over time, this improves posture, performance and can help in reducing risk of injury.

There will always be huge value in performing more traditional, old school stretching. However, by performing static exercise routines before a workout, you are only increasing your flexibility for a short period of time. The goal of this more static style of stretching is to get your body into a stretched position and then to hold it. In movement prep, you activate your muscles dynamically. This results in long-term improvements in mobility and flexibility. Instead of stretching your muscles out and then letting them go back to where they originally were, movement prep sets your body up to remember these ranges of motion. Movement prep helps you to develop more strength and stability in your training. It is best to do movement prep before every work out and then use static stretching as a cool down.

Movement prep not only prepares you for your upcoming workout, it keeps your muscles switched on all day. But why is that important? Imagine you are walking along, and just like in a cartoon, you slip on a banana skin. It is your bodies proprioception that determines how you react, and in turn how, or if, you fall. Proprioception refers to the structure of pressure sensors in your joints, muscles and tendons that work together to keep you balanced. Movement prep not only activates your small muscles, it also fine tunes your sense of proprioception.

The goals remain the same in both the traditional warm up and movement prep. The distinction is found in the fact that movement prep also prepares both the motor and neuromuscular systems.

To ensure a complete movement preparation, it is essential that you include all the foundational movement patterns: squats, lunges, push, pull, and rotations. Start slowly and in a controlled manner, and gradually and progressively increase speed, and intensity. You should set aside at least ten to twelve minutes to fully warm up the body. Be sure to tailor each movement prep session to the upcoming workout, it always needs to be adapted based on the movements that you are working on.

Neural activation:  by the final stage of movement prep you are now ready to introduce full speed efforts, coupled with short intervals. The aim is to activate the nervous system for the loads of the upcoming movements. Making progressions from general to specific, slow to rapid, low force to high force movements, allows for post-activation potentiation. These movements should again reflect the demands of the upcoming workout. There are some great ideas for neural activation in this video. 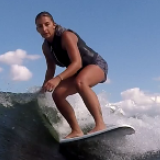 Stephanie Contomichalos is a sports enthusiast. She is an avid crossfitter, wakeboarder and has recently qualified as a Level 1 CrossFit coach. She is also an advocate for women’s sport and for using sport as a tool for development. She is currently living in Athens, Greece. To connect with Stephanie, follow her on Twitter (@ssconto) or on Instagram.