3 Things Athletes Truly Need from their Strength and Conditioning Program

Discipline is a pre-requisite for any high-level athlete, as they grow and progress from a hobbyist, to an amateur, to a world-class athlete, their trust and respect is developed for those who took part in their success. However, with the growing popularity and variety in training methods for athletes, this trust and respect could be put in the wrong hands.

From CrossFit to movement coaches, and all the way to “resistance band training experts”, an athlete is pulled in different directions. The movement coach promises better proprioceptive awareness and movement of the body, the resistance band coach promises a workout that will leave you “tired and mentally stronger", and CrossFit promises to bring you that competitive edge in an endeavor that the athlete is not focused on being competitive in.

[This piece is written from the perspective I have gained as a professional fighter, a coach of hobbyists and professionals alike, as a student of strength & conditioning experts who have worked with top level athletes, and as a journalist who has had the opportunity to interview athletes and coaches of all levels, Paul Banasiak]

Keeping these three principles in mind before any effective strength and conditioning program will keep the athlete healthy, more efficient, stronger, faster, and above all, focused on sport specific skill work.

Tailored To Their Need, Not The Coach’s

A coach may have been successful with an individual athlete by using a specific training regimen or modality, that doesn’t necessarily translate into success of another individual nor does it mean that this program is an effective measure to use again. From my experience, adaptability is the most critical factor in sport. The same applies to coaching.

An athlete must be assessed not only by their body composition and the numbers that they put up but by how they are built and what they are talented in, with a fraction of the training being focused on their weaknesses. Style comes into play and there is no blueprint, no textbook that teaches a coach how to adapt training based on the athlete’s style and personality; it becomes a missing piece of the puzzle within programming.

A boxer who grew up on the streets and fought his way into the professional rankings doesn’t need to be reminded of how tough he is by being forced to “dig deep” or by being broken down in training to build “mental fortitude”. However, the guy who seems to fade in the later rounds, the guy who shows quit through his body language. . . will benefit from this type of training.

Perhaps the athlete is naturally explosive with his movement, but tends to get injured often. His asymmetries, posture and basic anatomical movement may need re-adjustment which will be the focus of the programming. It is not about your coaching style, it is about the individual athlete’s specific needs.

The Biggest Bang For Their Buck

This may be the most important takeaway. Any professional, whether it be an athlete or an entrepreneur, has to focus on the 80/20 principal when competing at a high level.

"The principle was suggested by management thinker Joseph M. Juran. It was named after the Italian economist Vilfredo Pareto, who observed that 80% of income in Italy was received by 20% of the Italian population. The assumption is that most of the results in any situation are determined by a small number of causes.”

As the athlete is pulled in the directions I listed above, movement on Monday, cross fit on Tuesday and Thursday, yoga on Friday etc. he becomes a master of none, the results lag, and his or her true potential is never discovered.

When we take a look at creating the most efficiently explosive athlete we don’t look at 20 different individual parts and methodologies. We sharpen their technique, and once efficient and safe, we progress from there. Do I take my fighter and spend a half hour on ab work, 15 minutes on balance, 15 minutes on flexibility, 15 minutes on leg strengthening work and finish there? Forcing him or her to come back four more times that week to see any type of progress?

Most of the above components within the example I just listed can be worked on in the “biggest bang for your buck” exercises such as the squat, the deadlift, the clean, the press and a few more movements I like to use for accessory work. They all require tremendous core strength, stability, proprioceptive awareness, flexibility and strength.

The focus should be on providing the athlete with results, making them increasingly mobile, strong, and fast, without taking away from the skill work, which I will repeatedly say is of the utmost importance.

Modes Of Recovery And Protection

A large part of strength and conditioning that is often overlooked is its ability to protect the athlete from injury and its role in recovery through movement efficiency and pre-habilitation work. As a professional Boxer, I learned about rehabilitation work after already suffering from injuries that will stick with me till the end of my career.

The same movements that rehab injuries could be used to prevent them from happening in the first place; keeping the athlete healthy and in the gym always serving as a top priority.

Taking the principal of adaptability we spoke of earlier, dependent on the athlete’s needs, the need may be to take a day to work on deep tissue work, to break up inflammation within their shoulder capsule, or to use active forms of recovery. Keeping the athlete busy, but bringing them closer back to 100% recovery.

A high-level athlete will almost never be 100% recovered, the intensity of the training is what keeps them competitive, but 100% is the aim knowing that we can work with much less.

Bringing It To A Close

A competitive athlete has an internal source of motivation and work ethic, the job of the strength and conditioning coach becomes keeping this energy organized, efficiently progressive, and specific to the athlete’s needs.

Both the athlete and the coach have to put their ego to the side and take an honest look at what the athlete is lacking, what needs improvement, what needs cutting back on, and how we can keep healthy without taking away from the athlete’s skill work.

Athletes first, egos second. Adapt dependent on mood, on character, on talent, and on the athlete’s skill set. That is the perfect strength and conditioning program. 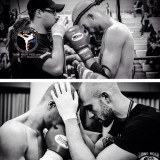 Paul Banasiak is a Professional Muay Thai fighter and 2x World Gold Medalist. A former strength and conditioning trainer, boxing coach who is now living, training, and fighting in Thailand. After leaving medical school without looking back, he decided to fully follow his passion of helping others become the best version of themselves by graduating with a health and exercise science degree and creating MuayThaiAthlete.com. A platform for those who are already passionate individuals who want to take their life, mindset & training to the next level.